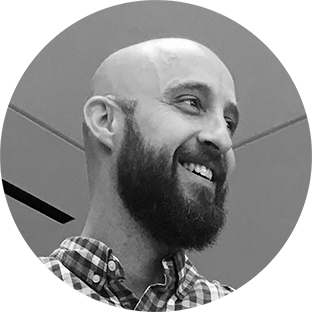 Making the decision to move to the cloud easier through design

Choosing the right cloud infrastructure for your business can be tough. Services, details and nomenclature used between the cloud providers all differ, making direct comparisons difficult and frustrating.

While working with Unitas Global, a cloud managed services provider for enterprise customers, set out to ask: How might we help customers make informed decisions about which cloud platform to go with and help establish Unitas as an authority in the cloud solutions industry? Our target audience was application developers and IT directors within enterprise organizations.

Within a 2-week sprint in Nov 2017, a design was conceived, finalized and implemented, including setting up virtual machine instances on AWS, Google Cloud and Microsoft Azure over Black Friday, in order to get real metrics to measure and test with users.

As the UX Lead, my responsibility was to have a design conceived and finalized within the first week of our 2-week sprint. This included the initial concept sketches, wireframes, clickable interactive prototypes, and high-fidelity design and interaction specifications that the development team would code to the frontend.

Immediately following the creation and implementation, I conducted ad-hoc usability studies with target audience participants at a cloud developer conference. I tested both mobile and laptop versions with 13 individuals ranging from junior application developers to directors of IT. The feedback and input we received helped us to learn more about our audience and provided insights that would help us plan through a larger overarching cloud management platform project.

My initial sketches focused on how we might be able to guide the user by providing a set of use cases for them to choose from, based on what type of cloud they would need.

Quickly, I jumped into digital sketching and prototyping to rough out my initial ideas and get something I could share with the product owner. In this prototype, the user is presented with a choice to pick a project type, which determines their cloud comparison view on the next screen. I used a variation of a box plot chart to try and represent lowest value, highest value and median value of the data. The higher values would represent higher rates of speed, and lower values equaling lower rates of speed.

I created an alternate design approach that contained the use case selection and comparison results in the same screen. Additionally, users could fine-tune their selections by adjusting the levels for CPU, Memory, Disk and Network. 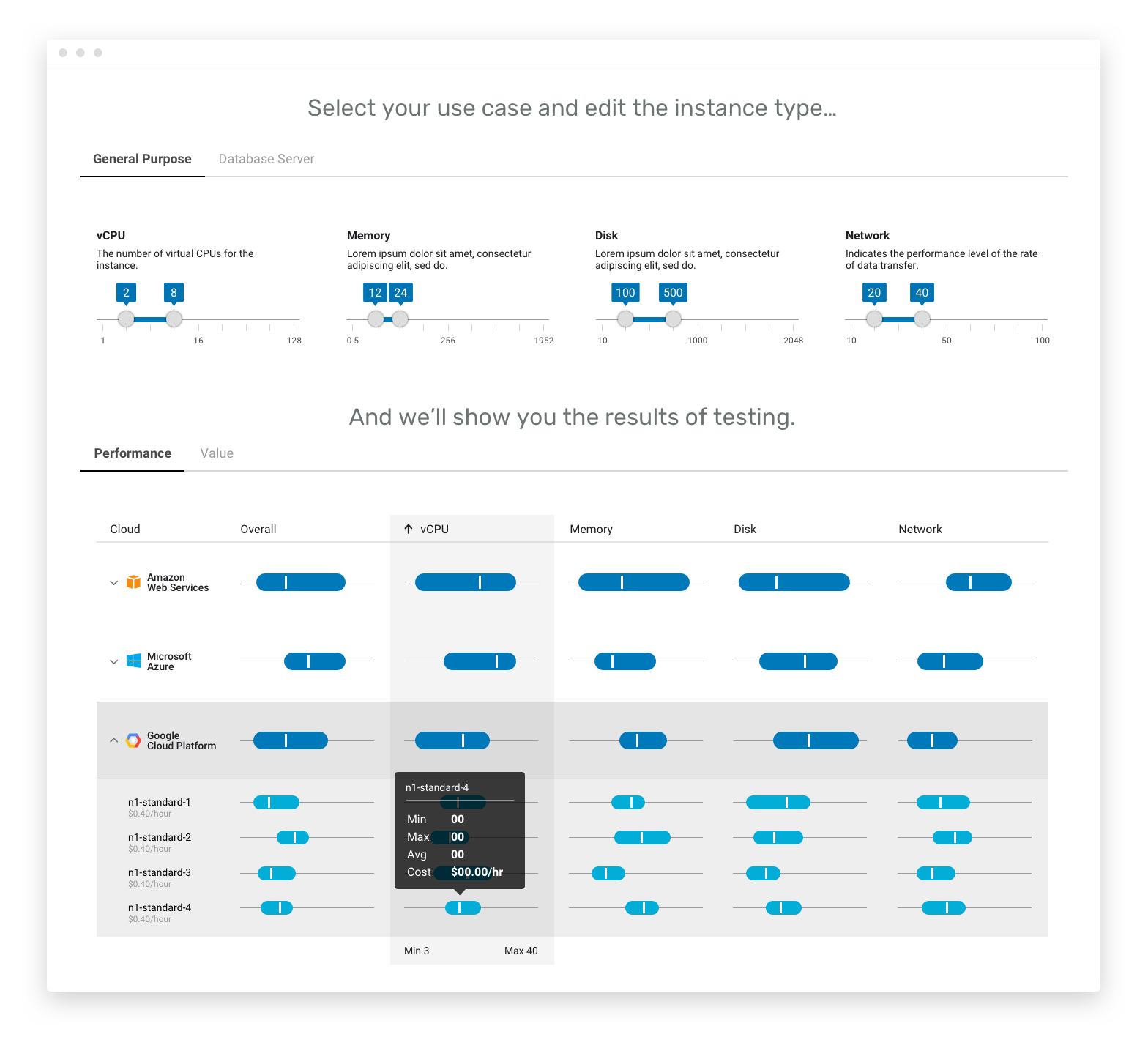 Next, I increased the fidelity and style to a more finalized version. Had fun with a space themed “cloud control” concept, but it didn’t make the cut in the end. I explored multiple design concepts to help flesh out as many approaches as possible. 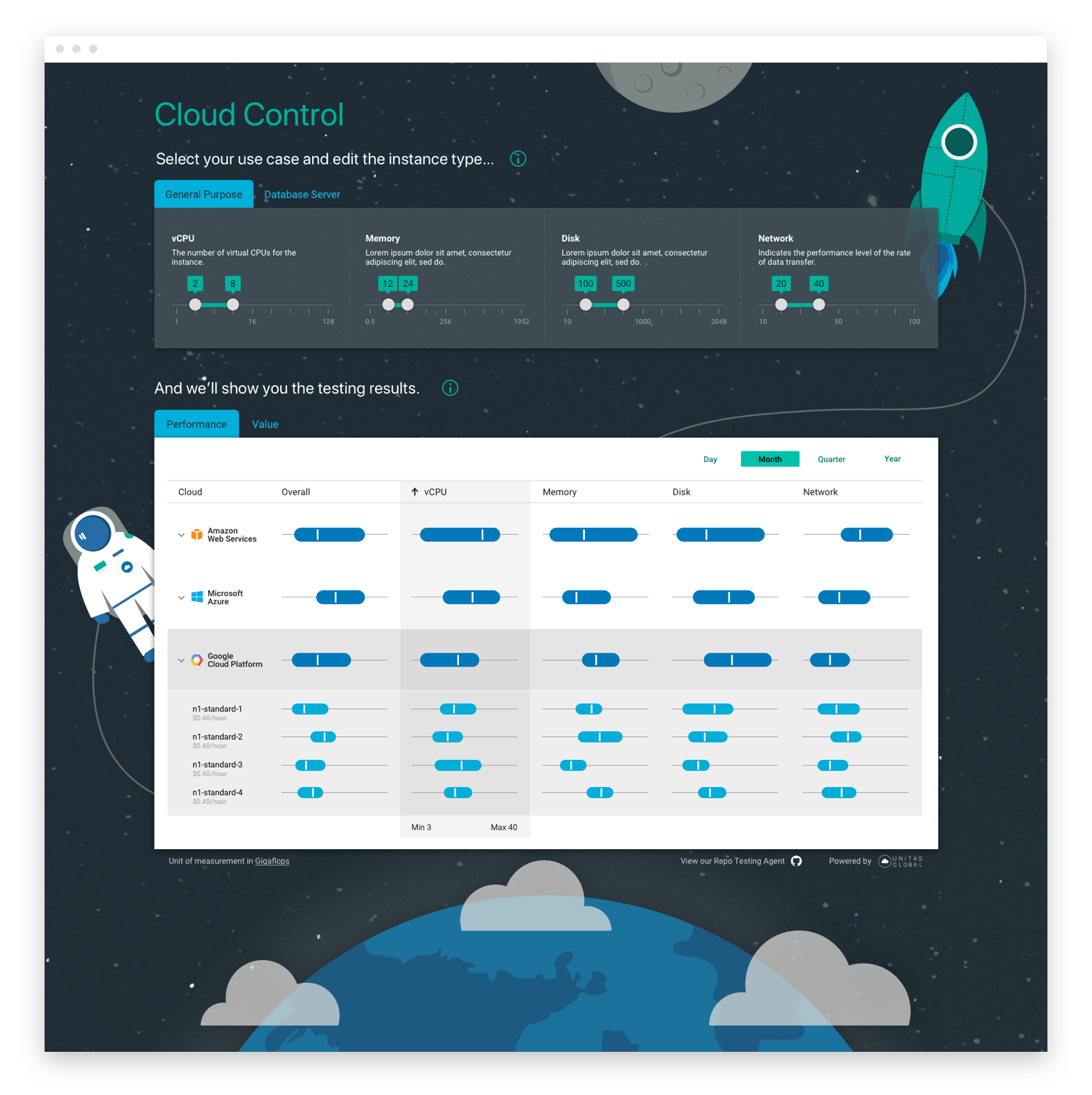 With each concept, review and discussion with the team, the design continued to evolve. The design became more simple and focused with each iteration. The final wireframe consisted of a set of simple controls, selecting the OS and size. We also decided to add a line and area graph view to provide a different perspective of the comparison data. Measured the cost by Gigaflop – a unit of computing speed equal to one billion floating-point operations per second.

One of the requirements starting out was for this to be a responsive web app, allowing users to experience the app based on the device of their choice. 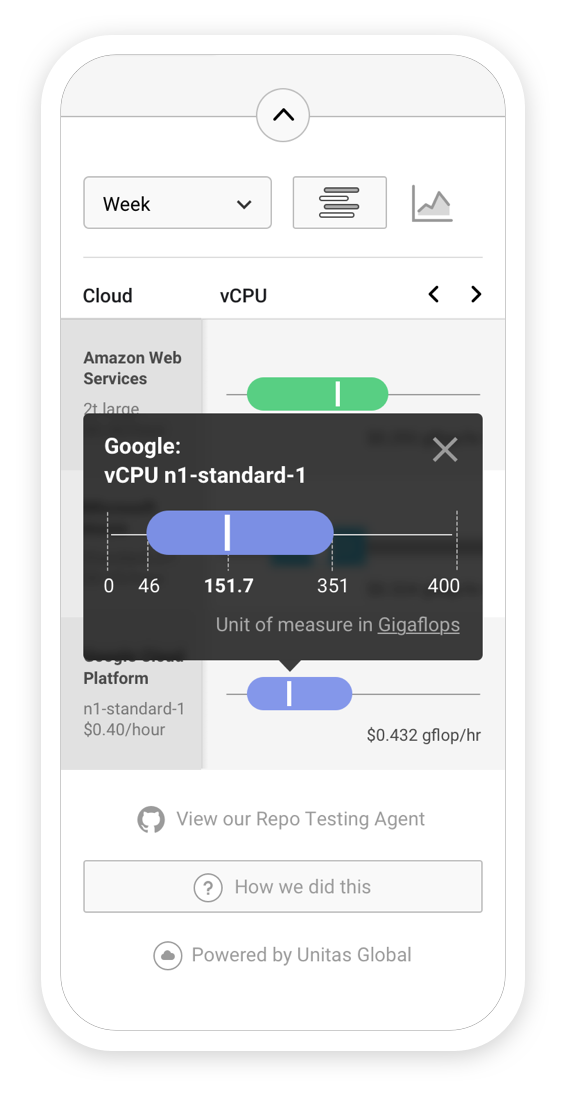 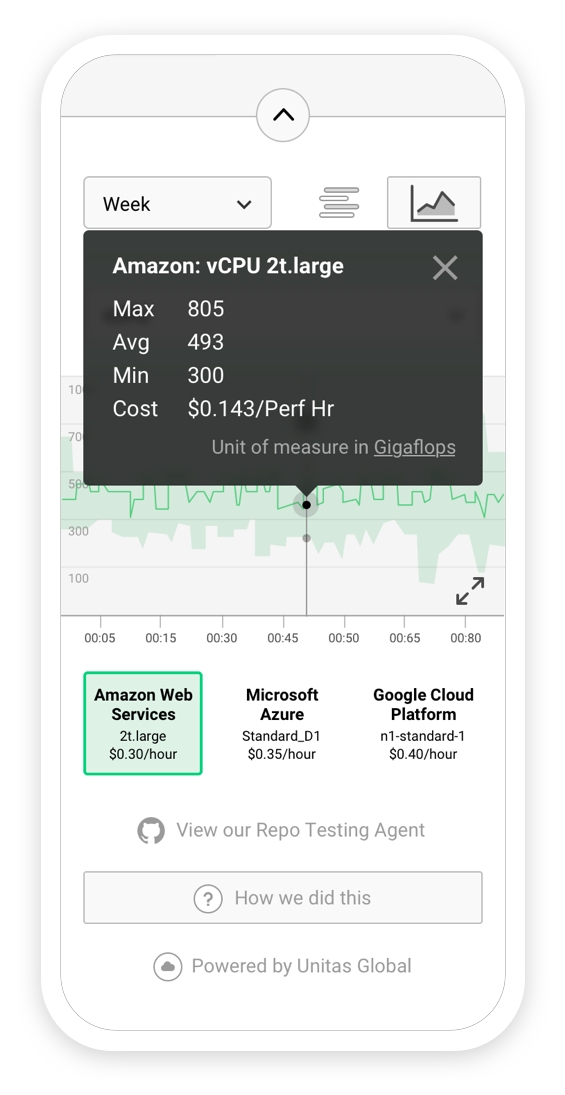 The final high fidelity designs are below. I created interaction guidelines and specifications for the development team to build from. 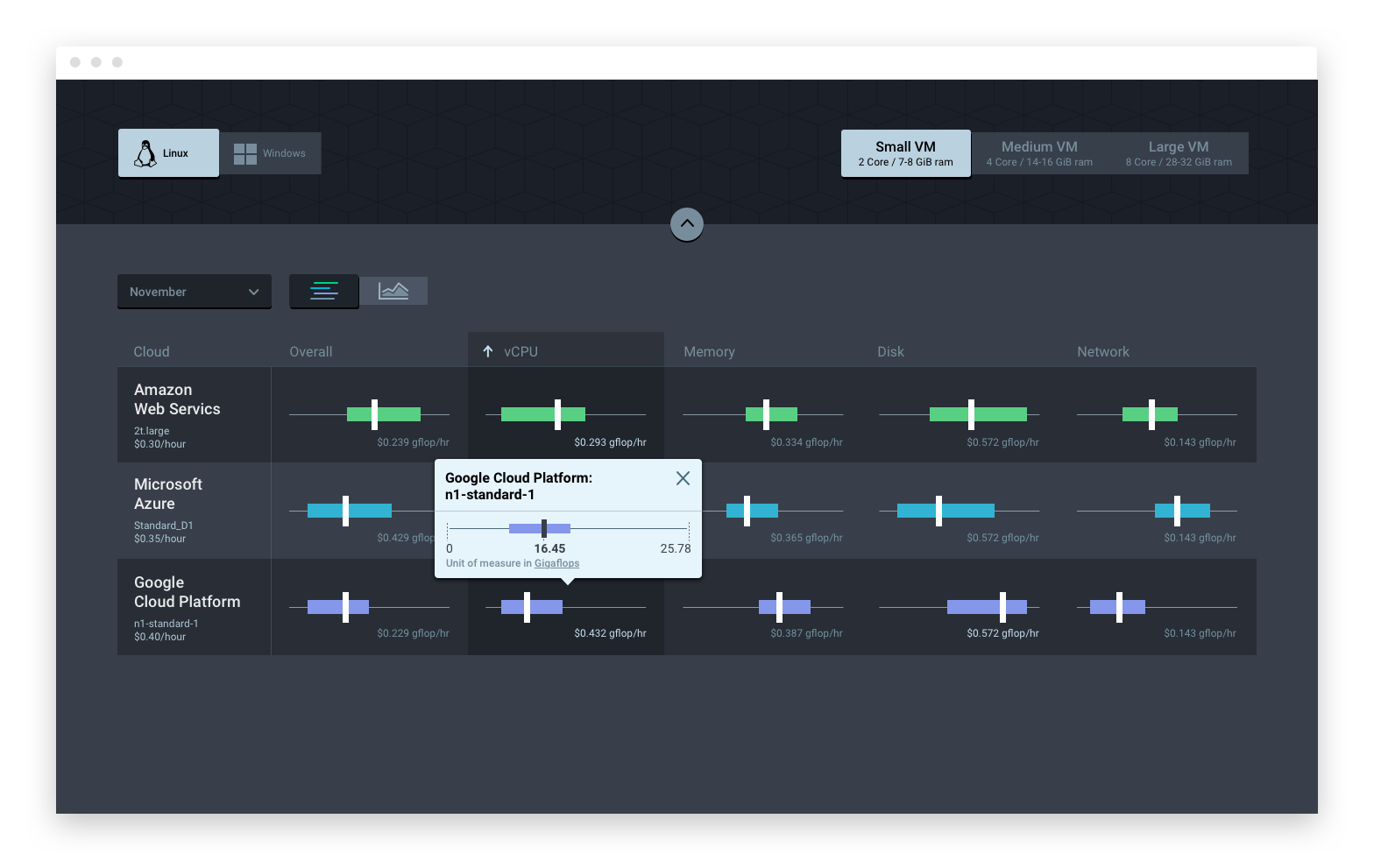 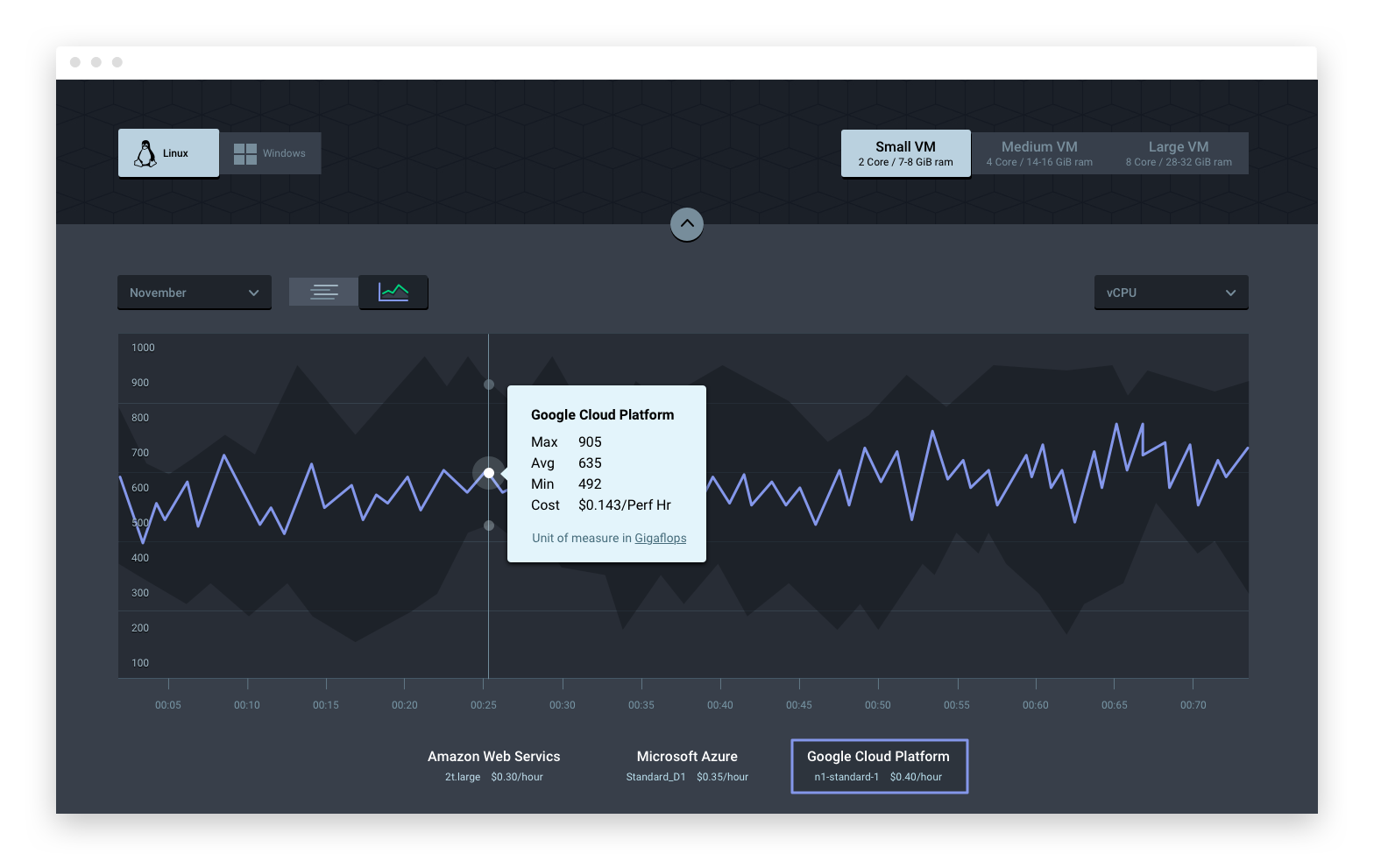 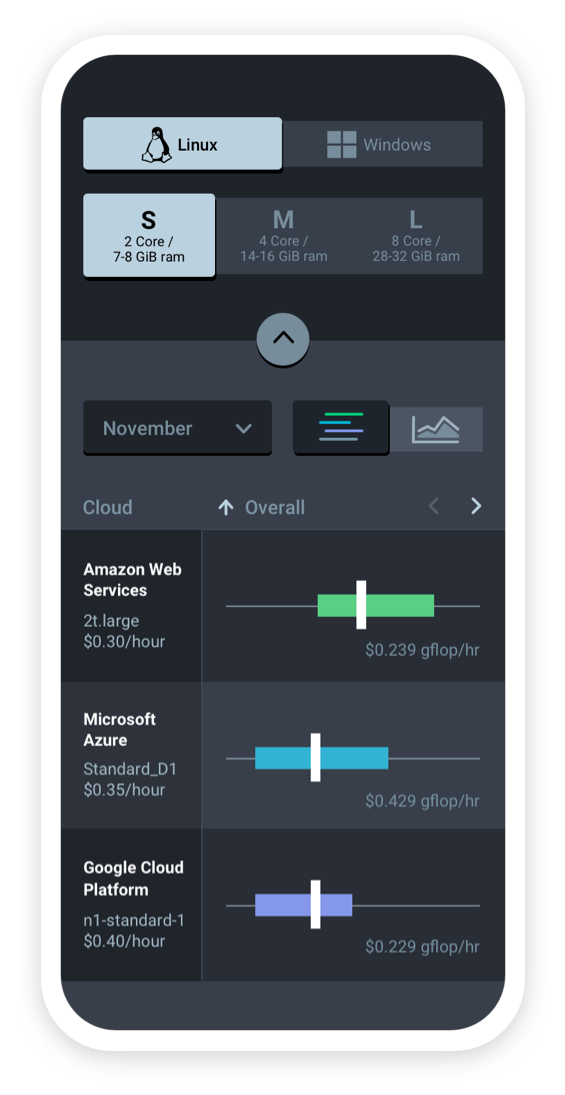 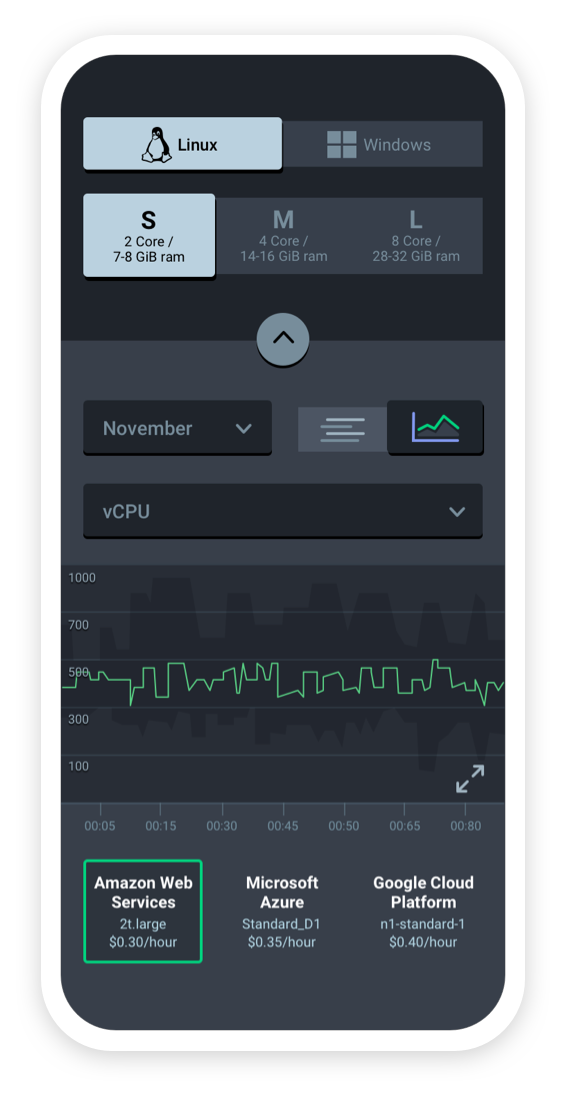 Immediately following the creation and implementation, I conducted ad-hoc usability studies with target audience participants at a cloud developer conference.

The goal of the testing was to better understand what is important to these users when they are comparing cloud platforms.

I tested both mobile and laptop versions with 13 individuals ranging from junior application developers to directors of IT.

The feedback and input we received helped us to learn more about our audience and provided insights that would help us plan through a larger overarching cloud management platform project. 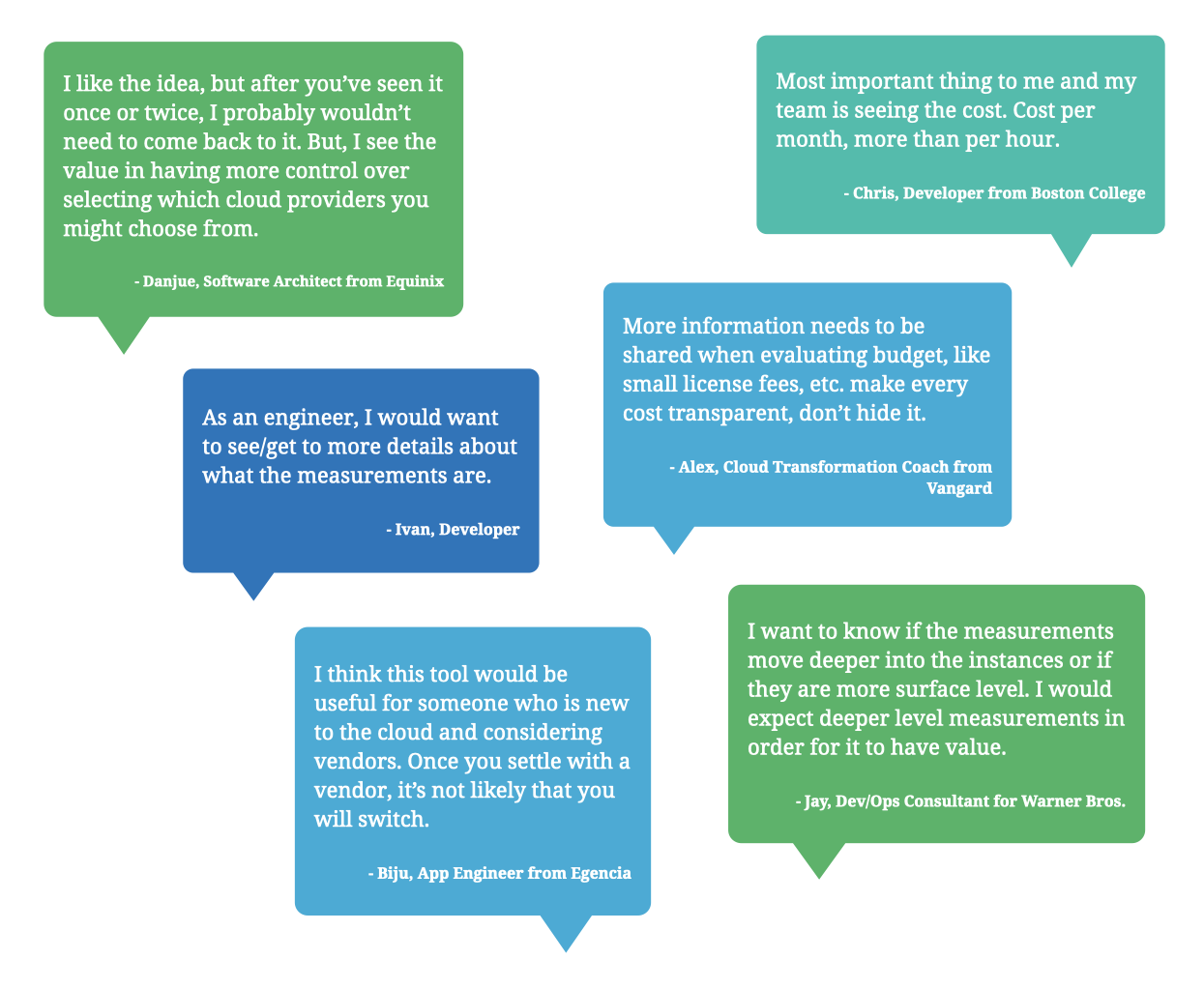 In retrospect, team resources and costs could have been dramatically saved had we just focused on creating and sharing paper prototypes and/or click-through mockups with the users we tested, and I believe we would have received similar insights.

However, the 2-week design sprint project was also an opportunity to prove to our board of directors that our newly-formed product team was capable of working together and building something quickly as a way to learn about the users we were interested in solving problems for.

The comparison app was live from 2017-2018. In the spring of 2018, I conducted an ideation session with our product team based on our user testing findings in order to revise our design. Shortly thereafter, executive leadership asked us to pivot to a different project and the comparison app was taken offline and put on hold.

Supporting the daily needs of college students through a mobile app